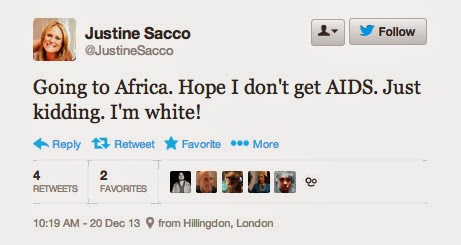 This week, Justine Sacco become famous on the internet and not in a good way.

As many folks know by now, Justine posted this tweet as she was boarding a plane for South Africa:

At the time, Sacco only had 200 followers on Twitter. But one follower forwarded the tweet to someone at Buzzfeed and it soon went viral.

After the controversy erupted, Sacco’s employer issued a statement announcing that they had “parted ways” with her. Sacco’s “offensive comment does not reflect the views and values of IAC,” the company said, adding it takes “this issue very seriously.”

Within hours, Sacco was trending on Twitter world-wide. The hashtag #HasJustineLandedYet was used by thousands as it became apparent all of this occurred while she was “off the grid” on a 20 hour flight to Africa.  The twitterverse was beside itself waiting to see if the tweet was just in bad taste or if her account had been hacked or if Sacco would offer some other excuse/reason for the distasteful tweet.

Sacco has now issued a statement sending it to South African newspaper The Star and US broadcaster ABCNews, apologizing.

“Words cannot express how sorry I am, and how necessary it is for me to apologize to the people of South Africa, who I have offended due to a needless and careless tweet,” she wrote.

“For being insensitive to (the AIDS) crisis — which does not discriminate by race, gender or sexual orientation, but which terrifies us all uniformly — and to the millions of people living with the virus, I am ashamed.

“This is my father’s country, and I was born here. I cherish my ties to South Africa and my frequent visits, but I am in anguish knowing that my remarks have caused pain to so many people here; my family, friends and fellow South Africans. I am very sorry for the pain I caused,” she said.

Apparently Sacco had a history of tweeting rather judgmental statements. 12 hours before the above incident began, she seemed to fume about a fellow passenger:

And on February 24, 2012, she seemed to reveal the explicit contents of a recent dream:

“I had a sex dream about an autistic kid last night. #fml”

Out of the firestorm came a social good effort. Someone created the website, http://justinesacco.com which takes you to a website for Aid for Africa.

Lesson to be learned here, kids – think about what you write before you share it with the internet.