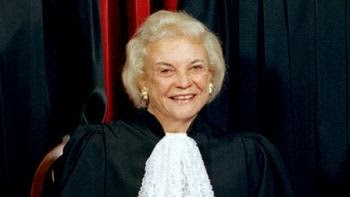 The Associated Press is reporting that retired Supreme Court Justice Sandra Day O’Connor officiated the wedding of a gay couple at the Supreme Court yesterday:

Justice Ruth Bader Ginsburg officiated at a weekend ceremony at the court in which two New Yorkers, including a former Ginsburg student at Columbia Law School, were married. Ginsburg has officiated at three same-sex weddings.