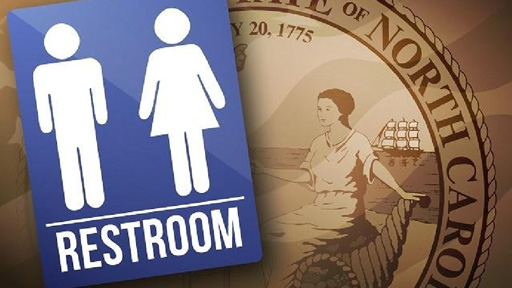 The Justice Department has issued a statement saying North Carolina’s recently passed HB2, which prohibits transgender folks from using the bathroom that aligns with their gender identity, violates Title IX, which bars discrimination in education based on sex, and Title VII of the Civil Rights Act, which prohibits employment discrimination.

House Bill 2, the Public Facilities Privacy & Security Act, puts in place a statewide policy that bans individuals from using public bathrooms that do not correspond to their biological sex. The law also reserves the right to pass nondiscrimination legislation to the state government, saying state laws pre-empt any local ordinances.

Should the ruling be upheld North Carolina stands to lose over $860 million in federal education funds.

State Rep. Chris Sgro, who is also the executive director of Equality NC, issued a statement which said in part, “The letter confirms what we’ve already known – that HB2 is deeply discriminatory, violates federal civil rights law, and needs to be repealed as soon as possible. We’ve already lost $500 million in economic impact and now we are violating federal civil rights law and risking Title VII funding.”

From the letter to North Carolina:

“Title VII prohibits an employer from discriminating against an individual on the basis of sex and from otherwise resisting the full enjoyment of Title VII rights….

“Federal courts and administrative agencies have applied Title VII to discrimination against transgender individuals based on sex, including gender identity….

“Access to sex-segregated restrooms and other workplace facilities consistent with gender identity is a term, condition or privilege of employment. Denying such access to transgender individuals, whose gender identity is different from the gender assigned at birth, while affording it to similarly situated non-transgender employees, violates Title VII …

Based upon the above, we have concluded that in violation of Title VII, the state is engaged in a pattern or practice of resistance to the full enjoyment of Title VII rights by employees of public agencies…

“Please advise the department, therefore, no later than the close of business on May 9, 2016, whether you will remedy these violations of Title VII including by confirming that the state will not comply with or implement HB2….

No response yet from Gov. Pat McCrory.