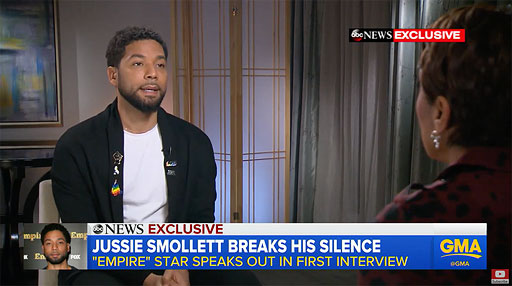 In his first interview since he told police he had been the victim of a late night attack in Chicago, actor/singer Jussie Smollett says he’s disappointed some doubt his story.

“I have to acknowledge the lies, and the hate,” the Empire star told Good Morning America’s Robin Roberts. “And it feels like if I had said it was a Muslim, or a Mexican, or someone black, I feel like the doubters would have supported me much more – a lot more.”

“And that says a lot about the place that we are in our country right now,” he added. 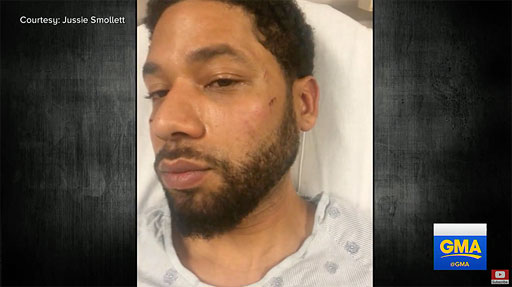 Police continue to investigate the suspected hate crime that Smollett says happened on January 29 around 2 a.m. as he left a Subway restaurant.

The 36-year-old actor says two men yelled homophobic and racial slurs to get his attention, then put a noose made out of white rope around his neck, poured a liquid on him Smollett says was bleach, and then beat him. Smollett says the men yelled, “This is MAGA country” during the attack.

He was later treated for bruised ribs and injuries to his clavicle bone at a hospital.

Smollett says he thought if he told the truth, then, “That’s it – that’s the truth.” But, then as he began to hear doubters, he came to feel, ”Oh, it’s not necessarily that you don’t believe that this is the truth, you don’t even want to see the truth.”

“For me, the main thing was the idea that I somehow switched up my story, you know? And that somehow maybe I added a little extra trinket, you know, of the MAGA thing,” Smollett told Roberts. “I didn’t need to add anything like that. They called me a fag, they called me a n*gg*r. There’s no which way you cut it. I don’t need some MAGA hat as the cherry on top of some racist sundae.”

He explains he didn’t immediately call the police out of a sense of pride, saying, “We live in a society where, as a gay man, you are considered – somehow – to be weak, and I’m not weak. And we, as a people, are not weak.”

Smollett says he believes the image of two people found on surveillance cameras by the police are his attackers, saying “I don’t have any doubt in my mind that that’s them – never did.”

And moving forward, he says he “will never be the man that this did not happen to. I am forever changed.”

And Smollett has a message for the LGBTQ community. “I want a little gay boy, who might watch this to see that I fought back.”

“Learn to fight; learn to be a fighter,” he continued. “I’m not advocating violence, at all. If you are going to die, fight until you do. Cause if you don’t fight, you have no chance.”

Shortly after Smollett’s interview aired, Chicago Police spokesman Anthony Guglielmi tweeted that authorities have found the persons of interest captured on surveillance cameras around the time of the alleged attack and they are being questioned.

Guglielmi emphasized the two are “not considered suspects at this time as they are currently being questioned by detectives.”

He added, “We remain in communication with the alleged victim.”

Important for media reporting: The people of interest are alleged to be in the area where a crime was reported. They are not considered suspects at this time as they are currently being questioned by detectives. We remain in communication with the alleged victim. pic.twitter.com/JuH1kYRTYV