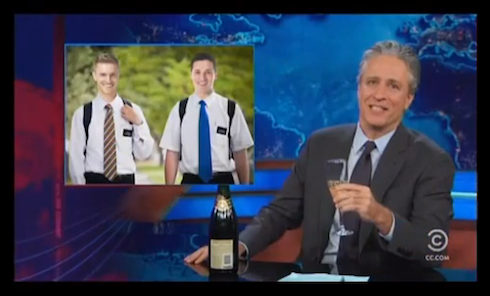 Jon Stewart was admittedly surprised Thursday night at the gains gay marriage is making even in strongly red states like Utah in Oklahoma, even if in one of those cases people are stuck in a complex Schrodinger’s marriage paradox. Utah officially recognized gay marriage, except that it then decided not to, but then the federal government stepped in, so they’re sort of married, but not fully, and… well, Stewart couldn’t really make heads or tails of it.

Stewart also mocked Louis Gohmert for saying that pro-gay marriage judges need “plumbing lessons”, explaining that there are male-to-male, female-to-female, and two-male-one-female pipe parts that actually exist, and Stewart couldn’t help getting a little aroused by them.