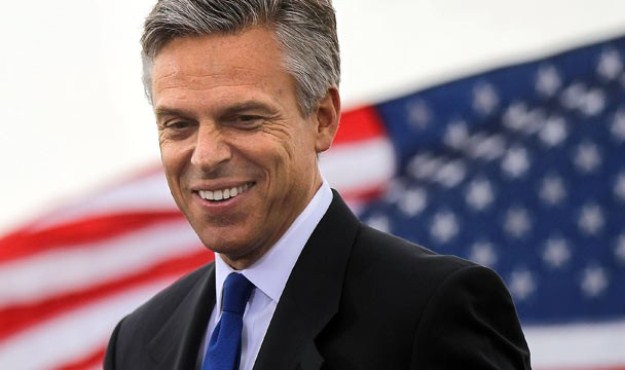 A Suffolk University poll conducted this weekend shows Mitt Romney dropping from 43% to 33% while Huntsman moved up to 13% from his 8% during the same survey last week, putting him in third place behind Ron Paul at 20%.

Huntsman tried using the weekend’s double-header of debates to separate himself from the rest of the field as a less partisan player. At one point he even lectured fellow Republicans for demagoguery about gay people.

“Talking about gays, talking about unions, everybody’s got something nasty to say,” he told them during Sunday’s Meet the Press debate. “You know what the people of this country are waiting for? They want a leader who is going to unify, who is going to bring us together, because at the end of the day that’s what leadership is all about. It’s not about taking on different groups and vilifying them for whatever reason, it’s about projecting a vision for a more hopeful tomorrow.”

During the Saturday night debate on ABC, Huntsman made the case for civil unions even while others onstage, such as Rick Santorum, argued for invalidating existing marriages of same-sex couples and amending the U.S. Constitution with a ban on same-sex marriage that Santorum said would ensure gays and lesbians can’t adopt or foster children.

Huntsman also opposes same-sex marriage but has not signed onto antigay pledges that would require him to back a federal amendment. Huntsman has said he eschews pledges as a rule. Santorum signed pledges from the Iowa Family Leader and the National Organization for Marriage. Romney signed the NOM pledge.