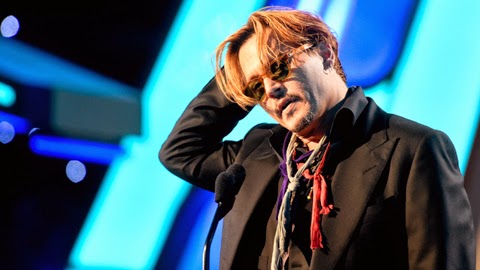 It looks like Depp had some trouble finding the microphone, which he then seemed confounded by. His speech introducing Gordon then had the audience leaning forward as you didn’t know what he was going to say next.

Myers, backstage, said the intro was very “rock and roll,” while the Twitterverse was thinking more along the lines of “wasted.”

Johnny Depp as Jack Sparrow only without the makeup and costume. https://t.co/LTWgrCBEMl
— Neil Cybart (@SammyWalrusIV) November 15, 2014

Johnny Depp drunk > Everyone else in the entire world— Mackenzie Kruvant (@mkruvant) November 15, 2014

I’m a fan of Depp and his work, and personally I love when these moments are much more “real” than the perfectly banal and scripted intros you usually see on awards shows.