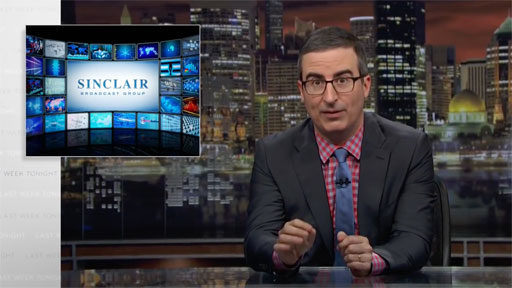 This weekend, I wrote about Sinclair Broadcasting Group’s chilling “must-run” editorials wherein we
saw dozens of local news anchors reading the same op-ed but delivered as if it was a local anchor’s opinion.

“Yeah. Nothing says ‘we value independent media’ like dozens of reporters forced to repeat the same message over and over again like members of a brainwashed cult. I guess what I’m saying here, Sinclair, is that as a news organization, I believe you make no sense.”

“When you see just how many local stations were forced to read it and you watch them together, as many have been doing online in the last couple of days, you begin to realize the true effect of Sinclair’s reach and power.”

So funny to watch Fake News Networks, among the most dishonest groups of people I have ever dealt with, criticize Sinclair Broadcasting for being biased. Sinclair is far superior to CNN and even more Fake NBC, which is a total joke.