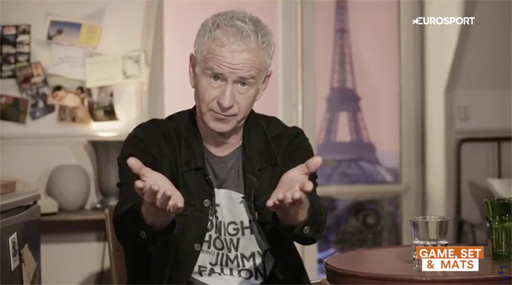 Tennis’s legendary bad-boy and elder statesman, John McEnroe, brings a comedic touch to the Margaret Court “lesbians in tennis” debacle in this irreverent “who gives a “f**k?” take on the subject.

In his satirical role as The Commissioner of Tennis on Eurosport, McEnroe said he was a “strong advocate of same-sex marriage”.

“I actually don’t see any reason why we shouldn’t give them the right to be as miserable as everyone else,” McEnroe said.

In the skit released on Saturday night in Paris, McEnroe said Court telling fans that “tennis is full of lesbians” prompted three thoughts to him.

“As for renaming the court that bears her name in Melbourne Park, the jury is still out.

“The self-appointed Commissioner of Tennis might have a viable solution: keep the name, and when same-sex marriage finally becomes legal in Australia, I will personally call my good friend Elton John to host the biggest same-sex mass wedding ceremony ever seen in the Margaret Court Arena.

“Margaret, that’s the kind of guy I am.”

Watch the elder statesman of tennis at work below: