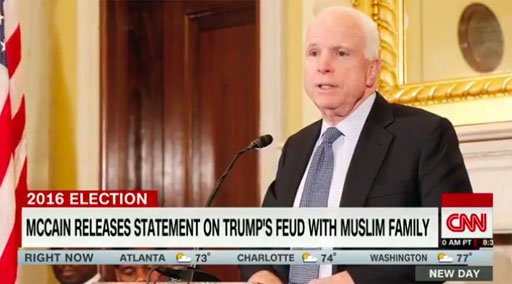 Over the weekend, Donald Trump found his comments about Khizr and Ghazala Khan being repudiated by several GOP lawmakers including Speaker of the House Paul Ryan and Senate Majority Leader Mitch McConnell.

Now, former Republican presidential candidate and military veteran Sen. John McCain has issued what is the clearest condemnation of Trump’s attack on the Gold Star family.

In a remarkable and lengthy rebuke of his party’s nominee, Senator John McCain sharply criticized Donald J. Trump’s comments about the family of a fallen Muslim Army captain, saying, “While our party has bestowed upon him the nomination, it is not accompanied by unfettered license to defame those who are the best among us.”

Mr. McCain, a war hero whose service and capture in Vietnam was also once derided by Mr. Trump, had stayed largely silent over the weekend as Mr. Trump’s feud with the parents of Capt. Humayun Khan brewed, waiting until Monday morning to release a prepared statement.

“In recent days, Donald Trump disparaged a fallen soldier’s parents,” he wrote of the parents, Khizr and Ghazala Khan. “He has suggested that the likes of their son should not be allowed in the United States — to say nothing of entering its service. I cannot emphasize enough how deeply I disagree with Mr. Trump’s statement. I hope Americans understand that the remarks do not represent the views of our Republican Party, its officers or candidates.”