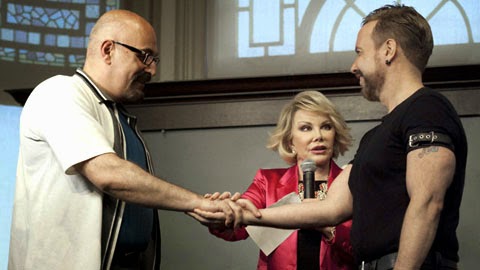 A couple of Joan Rivers fans decided “you don’t get if you don’t ask” at the comedian/author’s book signing of Diary of a Mad Diva at Barnes & Noble.  From ET:

Rivers, 81, was taking questions from her fans when Jed Ryan and Joe Aiello, a couple of three years, raised their hands and ask if the comic – who is an ordained minister capable of officiating weddings – would marry them right then and there.

It was a no-brainer for Rivers who quickly got them up on stage, had them hold hands, and then came up with some funny and touching vows on the spot.

“While we were waiting, we were reading the book,” Aiello told ET. “She mentioned being an ordained minister, and I jokingly asked [Ryan], ‘Do you think it’s true? Maybe she’ll marry us.’ And he goes, ‘Ask her.’ So I did. I don’t think he really thought I would, and neither one of us thought she’d say yes!”

Jed Ryan is an LGBT activist who appeared as a guest several times on during my time as co-host of The Candi & Randy Show. Great guy, and wishing rainbow wishes to the happy couple!

Check out the short but sweet ceremony below: