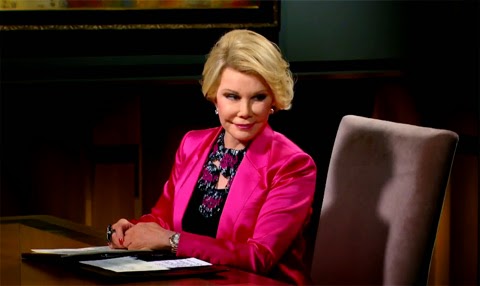 In what may be her last TV appearance (taped last Spring in New York City), the late Joan Rivers will arrive in the Boardroom of Celebrity Apprentice tonight as an adviser to Donald Trump.

Fans will remember she won Season 8 of the game show.

“Throughout history that’s always been a tough decision what do you do,” Trump said of Rivers’ death, “and she was so good we decided we’d leave it. She was incredible and very inspirational, so it’s in memoriam to Joan Rivers.”

“It was her in her prime, and I think people are going to get a great kick out of watching,” he told ET. “And I’m sure she’s going to be looking down and very proud of it.”

The show airs on NBC tonight at 8pm ET.