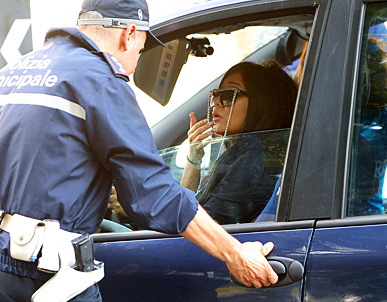 From The Daily Beast: On Monday afternoon at 4:30 p.m., Nicole “Snooki” Polizzi plowed one of the cast’s blue Fiat Multipla cars into the back of a police vehicle while driving on one of the side streets outside Florence’s city center. She then managed to wedge her dark blue car between the cop car and a cement barrier, scraping the passenger side and badly damaging the Jersey Shore vehicle. Deena Cortese, who was in the front passenger seat, had to exit the car through an open window. The impact was so violent that one of the police officers was treated with a neck brace and taken from the scene by ambulance.

Snooki was then taken into custody but has not been formally charged with any crime, pending the results of a drug test and reports on the condition of the driver. The producers of MTV told local reporters that no alcohol was involved in the accident, but the police were seen administering a breathalyzer test just to be sure, no doubt based on the cast’s reputation. Snooki was arrested for public drunkenness last summer, and her other housemates are all known for their debauchery.

This time Snooki could be in serious trouble. Italian court cases are painfully niggling and not always friendly to foreigners—just ask Amanda Knox. Trials often take years to complete for even the most banal infractions. If the police officer is deemed to be truly injured beyond simple whiplash, and if Snooki is found to be negligent, she may face serious charges. One of the obvious downsides for a reality TV star is that every moment of their life is captured on tape. This might prove lucky for the Florentine police, though. No matter what happens, they will most surely sequester MTV’s footage of the accident to see exactly what happened.

More at The Daily Beast