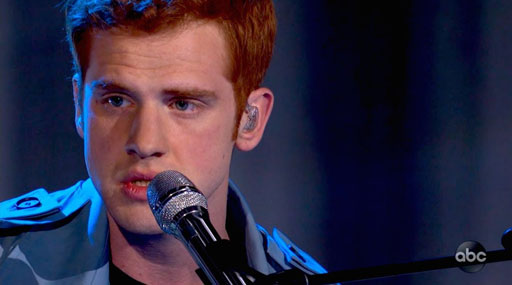 American Idol went live last night as the Top 14 look to the public’s votes to continue in the competition.

The show will reveal Monday night which contestants will go on to the Top 10. America’s votes will determine 7 of those spots, while the judges will choose 3 contestants to continue.

Out singer/songwriter Jeremiah Lloyd Harmon knocked another song out of the park continuing his string of solid performances.

As I’ve previously reported, his story as the openly gay son of a pastor in Maryland has already touched viewers. Following his progress, we’ve learned his family didn’t exact embrace his coming out three years ago.

But that drama was nowhere in sight last night as the 26-year-old sat down at the piano to sing.

The judges were falling over themselves to praise the young singer from Maryland.


“You just took an Elton John song, you went past Freddy Mercury, and you ‘Jeremiah-ed’ the whole thing,” said Lionel Richie.

Comparing Harmon to the two queer pop icons, Richie added, “There are notes that Elton can’t do; then there are notes that Freddie Mercury can’t do; and you went to a Z flat somewhere up there past Pluto and Mars. It was amazing. And your voice is amazing, and your career is going to be amazing.”

Katy Perry, who is also a ‘PK’ (pastor’s kid), has been a staunch supporter of Harmon’s from day one.

“You’re such a gift,” she continued, effusive with praise. “ You’re a light to the world. Your story is everything, and your talent supersedes all.”

“The whole time I’m watching that I’m like I’m not worthy to be sitting here watching,” added Luke Bryan — points were made. “I just see Jeremiah Lloyd Harmon on this big billboard.”

The judges loved his performance, but we’ll have to see how the voting viewers respond.

What do you think, readers? Is Jeremiah Lloyd Harmon the next American Idol?