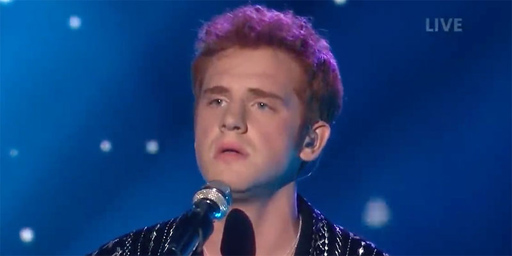 Jeremiah Lloyd Harmon, the gay son of a Maryland pastor, scored last night as he performed in front of his parents for the first time on his journey with American Idol.

With coaching from none other than Queen frontman Adam Lambert, Harmon offered a emotional, stripped down version of “Who Wants To Live Forever,” which resulted in a standing ovation from the audience, the judges, and most importantly, his parents.

During his initial audition for the reality talent competition, he shared that he had recently come out as gay, and his parents responded by telling him it’s ‘not a path’ they approved of.

He sang an original song he’d written, titled “Almost Heaven,” which questioned if there is a place for him in heaven. The song choice put the tension with his family center stage.

Last night’s song choice of “Who Wants To Live Forever,” famously sung by openly bisexual rocker Freddie Mercury, made it clear Harmon wanted to send a message with his parents in attendance.

But, while many are referring to the 26-year-old’s family ‘shunning him,’ he recently told Out that portrayal of his family dynamic wasn’t quite accurate.

“I’ve never said that my parents have rejected me, or don’t accept me as me, their son,” he shared with Out. “And that in combination with my parents not being able to make it to the first couple performances and [not being] featured on the show yet, you know, it’s easy for people to take that and run with it … in reality, they’re just trying to integrate this experience and they’re processing it in their own way.”

Judge Katy Perry, who is also a ‘pastor’s kid,’ has championed Harmon from day one. After his haunting performance which showed off his effortless high notes, she had only praise.

“Jeremiah, you really embodied the spirit of Freddie Mercury with that performance,” said Perry. “It was so beautiful seeing you perform in front of your parents for the first time, and it’s so wonderful to see your journey.”

“And to see your parents come out here, and support you, and accept you, and know it’s a “come as you are” situation,” she continued. “God bless you.”

Luke Bryan remarked on Harmon’s ability to “take us on a complete journey.”

And elder statesman Lionel Richie chimed in, “There’s something you just can’t teach – the ability to draw people in.”

“The dynamics of your voice, you’ve got a band that sounds like that much power coming behind you, and you take the band to the next level,” said Richie. “That means you’re doing something powerful.”

“Your voice is something to be reckoned with,” he finished, adding, “I’m very proud of you and keep up the good work. The best time to do it is in front of your parents.’

Stay tuned, folks, because Harmon made it to the Top 6 now.

Could we have our first openly gay American Idol?