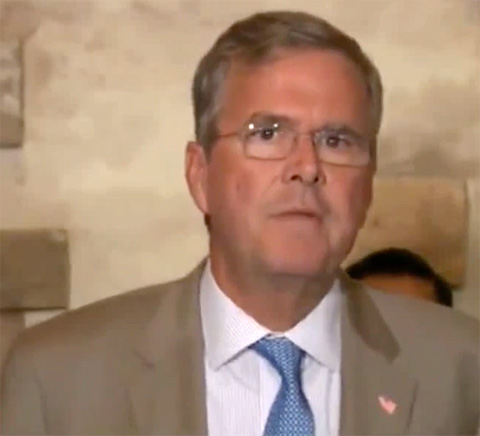 At a press conference yesterday, Jeb Bush defended his use of the term “anchor babies” and made a point to speak in Spanish to show how “Latino” friendly he is.

Bush, however, said he’s “immersed in the immigrant experience,” referring to his wife who’s from Mexico. He also speaks fluent Spanish and has lived in the Miami area for decades. “This is ludicrous for the Clinton campaign and others to suggest that somehow I’m using a derogatory term,” he said, adding, “Frankly it’s more related to Asian people coming into our country, having children, in that organized efforts, taking advantage of a noble concept.”

Well, I can see that makes things much more palatable. It’s the ASIANS and not the LATINOS who are the “anchor baby” problem?

Clearly, Jeb is now working to alienate the asian community, too.

Bush’s clumsy mention of his fluent Spanish inspired Trump to mock that skill by retweeting this message from a follower – “Jeb Bush is crazy, who cares that he speaks Mexican, this is America, English !!”