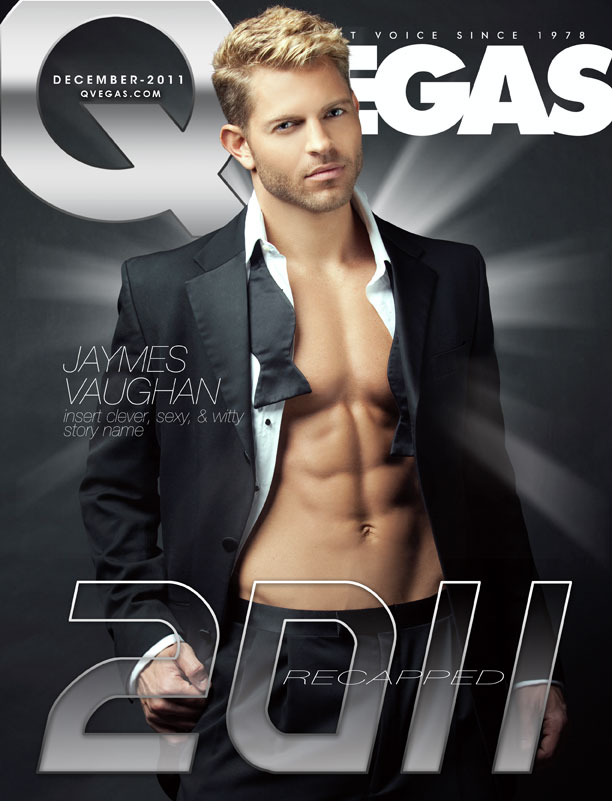 Very proud to have written the cover story for this month’s issue of QVegas Magazine featuring The Chippendales’ Jaymes Vaughan and his coming out story.

Here’s an excerpt of the article:

Vaughan recently released his first single – “Vampire” – as a solo recording artist. Out of several songs he’s written, he chose this song to be his first for a few reasons. “First, deep down inside, I’m like a five year old boy and I want to play a vampire. I’ve always loved vampire movies and vampire TV shows. So I’m thinking there would be a music video and I’ll get to play a vampire. And I did. For three days I was on the set of my upcoming music video with 72 people running around being a vampire.”

“Living in the light” is a concept that has recently played itself out in Vaughan’s real life the past few months. He recently came out to his family, and their acceptance coupled with the experience of hosting Las Vegas Pride this year, led him to make the decision to live his life in a more open manner, both personally and professionally.

“Hosting Gay Pride in Las Vegas this year, it was the first time I ‘got it.’ I got up on stage and finally understood what “pride” was about. It’s about being proud of your self and encouraging other people to be proud of themselves. The best, most reassuring thing that happened to me at Pride this year: when I came off stage, a little 12 year old boy came up to me and said ‘I want to do what you do.’ And I was like, that was all I wanted when I was a kid. I wanted someone to look up to.”

“I’m really excited about the possibilities of inspiring someone; the possibilities of changing perceptions. I hope to be able to take advantage of a platform so that my fourteen-year-old self that was sitting in Chesterfield County, Virginia, might find some hope. The fourteen year old that had no one to look up to; whose mama told him he better not be gay; whose church told him he was going to hell; whose best friend killed himself because he didn’t “fit in.” Because he didn’t have any hope. I thought for so long you had to cover up who you were to be successful. I’ve realized you can be more successful by being yourself.”

To read the rest, go to QVegas Magazine – THE source for LGBT news and information in Nevada.