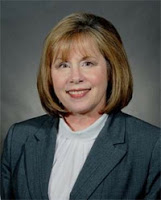 Janice Daniels, the mayor of Troy, MI, compared being gay to smoking cigarettes on a recent talk-show appearance, according to CBS Detroit.

Last December Daniels earned the ire of many—and finds herself facing a recall effort—after she posted on Facebook “I think I am going to throw away my I Love New York carrying bag now that queers can get married there.”

That little dig cost Daniels her job at the real-estate company Century 21, even though she claimed, “I know that as mayor, I represent all of the people in this city.” Organizers of the recall effort against Daniels submitted 9,300 signatures to the city’s Election Division this week. (They only needed 7,985.)

Not realizing she should’ve quit while she was behind, Daniels went on Charlie Langton’s morning talk show on Radio 1270 to “explain” herself.

When Langton asked Daniels if she thought being gay was “dangerous,” she replied “I think that doctors can make a case for it certainly,”but said she personally “had no opinion” on it.

Determined to make every faux pas in the book, Daniels even trotted out the “some of my best friends are gay” card. Well, her version of it, anyway: