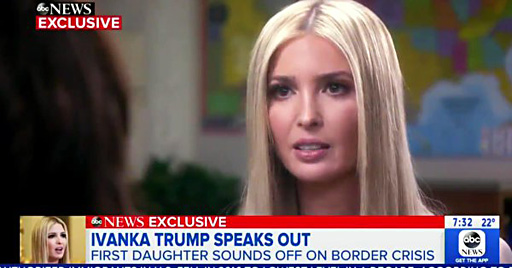 Ivanka Trump tells ABC News today the recent revelation that she’s used a private email account while doing government business has no “equivalency” in comparison to Hillary Clinton, who her father bashed over and over again for during the 2016 presidential campaign.

She says her personal email use was focused on “mainly scheduling and logistics and managing the fact that I have a home life and a work life.”

Speaking with ABC News’ Deborah Roberts in Wilder, Idaho, where she’s promoting STEM initiatives alongside Apple CEO Tim Cook, Ivanka Trump maintained that all of the emails on her private account were properly archived and contained no classified information. She is adamant they bear no resemblance to Hillary Clinton’s email scandal, which her father eagerly and frequently condemned as part of his campaign for president.

“All of my emails are stored and preserved. There were no deletions. There is no attempt to hide,” she said, adding, “There’s no equivalency to what my father’s spoken about.”

.@IvankaTrump to @DebRobertsABC on her use of personal email vs. Hillary Clinton’s: “There just is no equivalency between the two things.” https://t.co/yL3oLTXcqd pic.twitter.com/qBiTbw8BdB

In truth, Ivanka is correct to a degree – there is no equivalency.

Hillary left the State Department in 2013 and did not violate the actual Federal Records Act law that was amended in 2014 like Ivanka did.

One thing that people fail to note about how Ivanka and Hillary’s email situation is different: When Clinton did it, there was no law against it. Now there is.

Ivanka also pushed back at the idea her father had authorized “lethal force” on migrants. And then GMA played the video tape of him using that exact phrase.

GMA: Are you comfortable with your dad giving troops authorization to use lethal force at the border?

IVANKA: “I don’t believe that’s what he said.”

GMA: Actually he did. Here’s video of it.

IVANKA: “So… he’s the commander in chief, so he always has to protect the border.” pic.twitter.com/kT0WN1HHWG