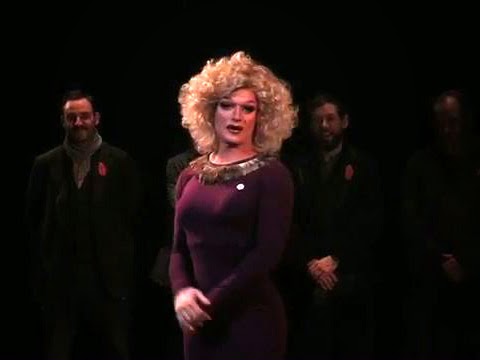 Ireland’s “most fabulous” drag queen has spoken out against homophobia at the Irish national theater, the Abbey, with such passion it got even Madonna’s attention.

Rory O’Neill’s (aka Panti Bliss) inspirational call to those who bully gay people has touched people around the world.

“Sometimes I hate myself. I f*cking hate myself, because I check myself when I stand at pedestrian crossings. And sometimes, I hate you for doing that to me.”

The statement came about due to an appearance last month on the Saturday Night Show when O’Neill alleged that the Institute and several associated journalists were homophobic. Irish Communications Minister Pat Rabbite had warned against using the term “homophobe” to describe opponents of equal marriage, saying it was “too loaded” a term to describe opponents of marriage equality.

As such, Ireland’s state broadcaster RTÉ has been forced to pay out €85,000 (£70,000) in damages to those journalists and members of the Catholic Iona Institute who were accused of homophobia.