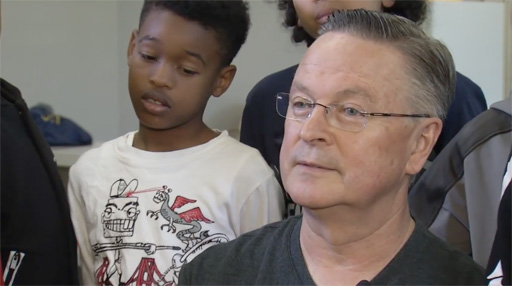 Rep. Rod Blum (R-Iowa) gets up and walks out of an interview with KCRG reporter Josh Scheinblum after being asked why he’s prescreening constituents who plan to attend his town hall that night. Blum’s staff was apparently checking IDs to ensure that only his constituents attended his town hall Monday night.

Even after prescreening, though, he ended up getting screamed at the crowd at his town hall.

It would seem the congressman came to the interview with a chip on his shoulder. Scheinblum told Talking Points Memo that the “kids as backdrop” wasn’t anything previously discussed for the interview. When the reporter asked Blum about it, the congressman apparently responded with something to the effect of, “Well, you know, all Republicans are evil, right?”

Blum represents a swing district that barely went for Trump in 2016 after supporting Obama in 2012, and now faces tough questions about his vote for Trumpcare.

Watch below as he leaves this interview just moments into the segment.