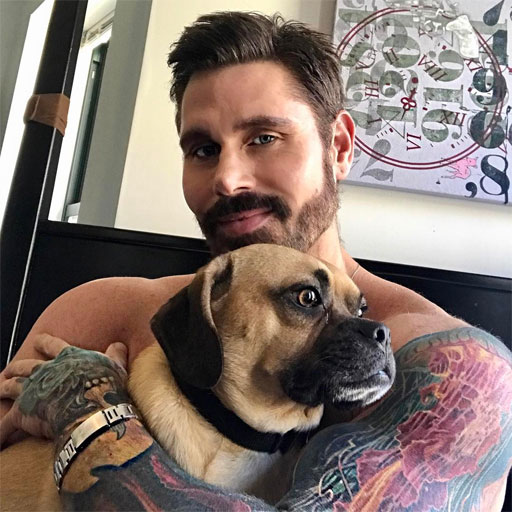 In 2008, while competing as a contestant on the reality series Project Runway, Jack Mackenroth shared with the world his HIV-positive status.

And since then, Mackenroth has dedicated much of his time working with HIV/AIDS non-profits as an outspoken activist.

In a new interview, Mackenroth tells HIV PLUS, “I don’t mind being a poster boy for HIV.”

“I was very cognizant of what I was doing when I came out on national TV a decade ago, because the HIV conversation had virtually disappeared from mainstream television,” he adds.

But after ten years of non-stop activism, the popular InstaHunk says he is “moving away from the non-profit sector” because he needs a break.

“The issue with non-profit stuff is that you are overworked and underpaid,” Mackenroth explains. “Like teachers, people expect that we should basically volunteer our services because we are doing important work.”

“I’m getting really close to 50, and I can’t be hoofing it all the time. It’s [also] relatively thankless work. I’m not doing it for accolades, but everyone likes… to feel like something beneficial is coming from your job.”

Diagnosed with HIV at the age of 19 in 1990, Mackenroth didn’t plan for the future because he didn’t think he’d have one.

Now, years later, Mackenroth has gone back to university to obtain a degree in nursing, plus he’s recently launched an OnlyFans.com account in an effort to monetize his large Instagram fan base.

Even though he won’t be working in the non-profit arena, the hunk says he’ll never leave HIV activism completely. Thanks to social media, he admits, “I get two to three Instagram messages a day from someone in a foreign country who just found out [they’re HIV-positive].”

“I still respond to nearly everyone who reaches out,” he assures. “I’m always available to talk. I’m very accessible. [People can] message me on Twitter or Instagram.”

When talking about HIV, Mackenroth is big on promoting the message that undetectable equals untransmittable (U=U).

The Centers for Disease Control and Prevention confirmed last October that HIV-positive people whose viral loads are suppressed to the point that they are undetectable cannot transmit HIV to sexual partners.

Mackenroth says people who are newly diagnosed with HIV often feel like, “I can never have sex again. I’m going to [transmit to] my partner.”

The former Project Runway star is emphatic in his advice: “Get on your meds, get undetectable, and you — and everyone else — will be fine!”

I highly recommend Angels In America on Broadway. It reminds me how much of the AIDS plague I have blocked out of my mind. It brings back so many emotions. I’ve cried 4 times already in the first 2 hours. I was diagnosed with HIV in 1989—only years after this play is taking place. I’ve been positive for 29 years. Statistically I should be dead. My boyfriend died in 1996 and I sat at his hospital bed for 4 weeks while he withered away. I was 27. The AIDS crisis is far from over. EVERY DAY I get at least one message here from someone who is newly diagnosed. It may look better than it did in the 80’s but all over the world people still die of AIDS. Know your status. In my opinion if you are HIV negative and in a high risk group you should be on #PrEP. Also know that HIV+ folks who are undetectable CAN NOT transmit HIV. I think Angels In America should have a night that is free for HIV+ people. Many of us are coping with PTSD and/or still struggling and can not afford a $300 ticket. It would be a noble way to honor the people that the play is centered around and to remember those who have died. #activist #hiv #knowyourstatus #fuckstigma #angelsinamerica #uequalsu #undetectable #aidsisnotover @angelsbway #weareallangels #whatliftsyou
A post shared by Jack Mackenroth (@jackmackenroth) on Jun 13, 2018 at 1:18pm PDT