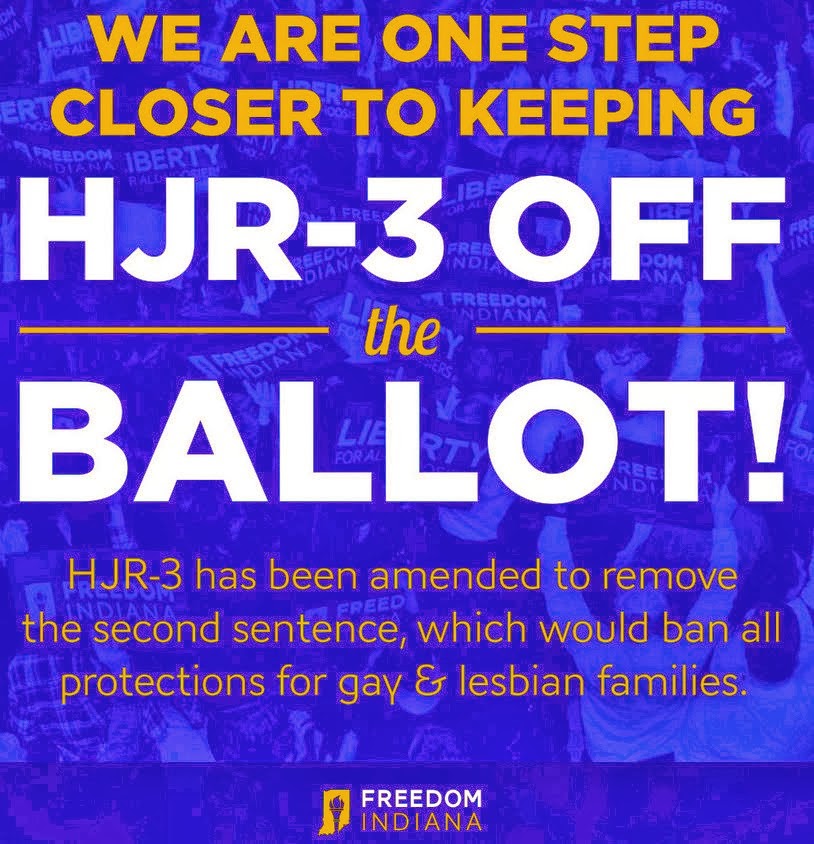 Today, the Indiana House changed the language of anti-gay marriage House Joint Resolution 3 by a 52-43 vote. Amending the language of the bill could very well prevent state lawmakers from sending the constitutional ban on same-sex marriage to the ballot in 2014.

As was being contemplated last week, the change removed the second sentence of the amendment, which would have banned any recognition of legal status for same-sex couples like domestic partnerships or civil unions. Some lawmakers had expressed concern that such an extreme law could inhibit companies from being able to attract the best and the brightest if such benefits were legally banned from being extended at corporations or universities, for example.

Should HJR 3 pass the House its new form, it cannot be sent to voters this year. Amendments to the Indiana State Constitution must pass in the same exact form in two consecutive legislative sessions before being sent to the ballot box.

HJR 3 was first passed in 2011, but it now becomes a new amendment, which — presuming the new form passes the House and then the Senate — must itself be approved in a second legislative session, meaning the earliest voters would see it on the ballot is probably 2016.

Originally passed in 2011, with this amendment HJR 3 theoretically becomes a new amendment which would then have to be passed in the next legislative session. That timeline makes 2016 the soonest voters might possibly see this on the ballot.

If you factor in rapidly changing sentiment on the issue of marriage equality PLUS the fact that at least three states – Nevada, Oklahoma and Utah – may see same-sex marriage cases land in the US Supreme Court, it’s very possible this could signal Indiana’s last gasp at marriage equality bigotry.

Today’s vote to remove some of the extremist language in the proposed constitutional ban on marriage in Indiana is a welcome step back from the brink. This offers the possibility that Indiana’s families will not be subjected to a harsh campaign and offensive ballot-measure that would add cruel and unconstitutional language to Indiana’s state constitution.

The support that we saw today from Indiana legislators—including Republicans—and the success in achieving this vote reflected the growing momentum for the freedom to marry the person you love, and a repudiation of the effort to strip gay Hoosiers and their families of all legal protection and respect.