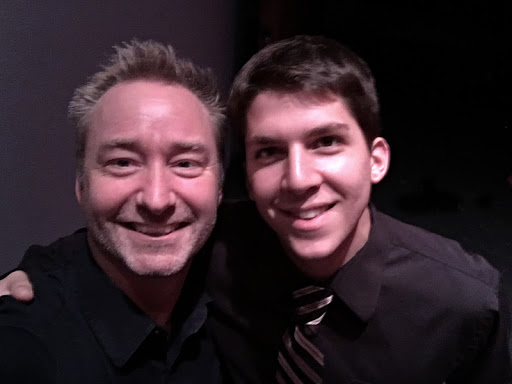 Back home again in Las Vegas and decompressing from my “Hello, Dolly!” adventure in Florida, as I’m sure the whole cast and crew is enjoying their well-deserved day off smile emoticon

And that reminds me – in addition to enjoying the work with the cast of the show, the unsung hero of the production is without a doubt our Production Stage Manager, Michael J. Iannelli, who personified super-hero qualities to get us to opening night.

With an uber-tight tech schedule and multitudes of obstacles, Michael rocked every rehearsal, schedule and meeting. We never saw anything less than full-on team leadership throughout the rehearsal process.

I know it’s far too rare that the PSM gets their due, when all of us in theater know the incredible role they play every day and night of a production.

I realized I hadn’t taken a single pic with him until literally moments before the curtain rose (or split) on opening night. I grabbed him and pulled him onstage (where the only light was) for this pic. I only wish the pic did him more justice, because in addition to being great at his job, he’s easy on the eyes, too, which always made arriving at work each morning that much better.