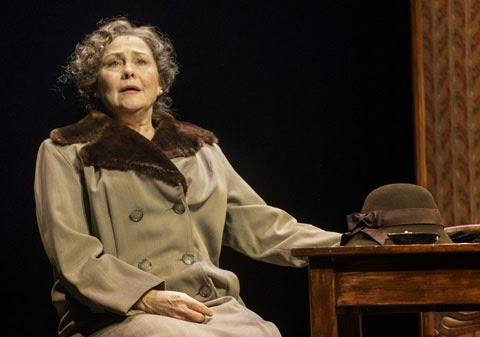 The New York Times “In Performance” series provides this glimpse into the new Broadway revival of “The Glass Menagerie” starring Cherry Jones and Zachary Quinto.

The production recently opened to RAVE reviews with the New York Times saying:

How can something be this delicate and this strong, so elusive and yet so tenacious? That question radiates from John Tiffany’s stunning production of Tennessee Williams’s “Glass Menagerie,” which opened on Thursday night at the Booth Theater and promises to be the most revealing revival of a cornerstone classic for many a year to come.
More than any interpretation I’ve seen of the 1944 drama that made Williams’s name, this “Menagerie” — which stars Cherry Jones and Zachary Quinto in career-defining performances — finds the brute force in a play often described, a bit condescendingly, as lyrical, wispy, elegiac. Yes, the tapered fingers of poetry shape “The Glass Menagerie.” But when these fingers curl into a fist — and they do so again and again in this production, before you quite realize it — be prepared to have the breath knocked out of you.

If you can’t get to NYC to see the play, here’s a taste of what is currently on view at the Booth Theater.