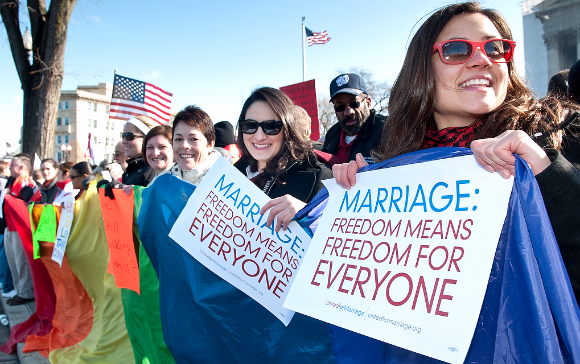 This is the final week of the Illinois state legislative session.

Lawmakers there have four days to bring to the floor and pass the marriage equality bill.

The Chicago Tribune weighs in today:

For those who favor individual freedom, this isn’t a stretch. We say that with equal respect for those whose religious or moral beliefs lead them to other conclusions.

The Illinois legislation, which has been approved by the Senate, affirms the great value of marriage. It extends that right to same-sex couples. It protects their children. It states that churches are not required to recognize or solemnize same-sex marriages.

This is an issue for states to resolve, and the list of those that accept same-sex marriage is growing. It’s time for the House to vote. Under the I’s, add Illinois.

State Rep. Greg Harris, who has championed the bill in that chamber, has said he will call a vote for the bill when he has the votes to pass – which he has stated he believes he has.

Time is running out.

“This is a well-thought-out decision,” he said in an exclusive interview with the Journal.

Ford, a one-time seminarian, said he had prayed over it. He said he has been swamped with strong opinions from constituents on both sides of the controversy. He acknowledged he has felt heavy lobbying from a politically active segment of the black clergy.