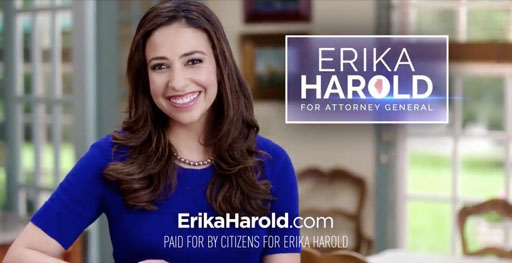 Erika Harold, a former Miss America and currently the frontrunner in the GOP nomination for Illinois Attorney General, once told Miss Illinois pageant officials that she would choose to place a foster child in the home of a child abuser rather than in the home of a loving gay couple.

It will not surprise you to learn Ms. Harold has no recollection of the “alleged exchange.”

From the local NBC affiliate:

NBC 5 has spoken to three people, who all played a role in that Miss Illinois pageant, with direct knowledge of the exchange. They were present when Harold responded to the question.

One of the pageant officials said: “I remember it because it was so shocking. She took some time to answer it. And that drew people in. It stopped the room.”

That pageant official said: “It said a lot about her, she spoke about reading the Bible daily and said her beliefs could not subject a child to the gay lifestyle.”

Harold’s spokesman originally told NBC 5 Harold did not recall this interview since it was nearly 20 years ago. In a second phone call, the spokesman said, “I have a real problem with this story, less than two weeks before the election, unnamed sources are going to say this?”

Another source who was also present for the interview said, “I remember it like it was yesterday. It was shocking.”

Harold’s campaign released a statement to NBC 5 after repeated requests:

“Voters should first know that NBC Chicago has chosen to air an unverified story from anonymous sources twelve days before an election about an alleged event that supposedly occurred nearly two decades ago when Erika was 20 years old. Erika does not recall the alleged exchange, but Erika certainly support[s] same-sex adoption and foster care placement.”

Current Illinois Governor Bruce Rauner, also a Republican, has endorsed Harold and donated $350,000 to her campaign.