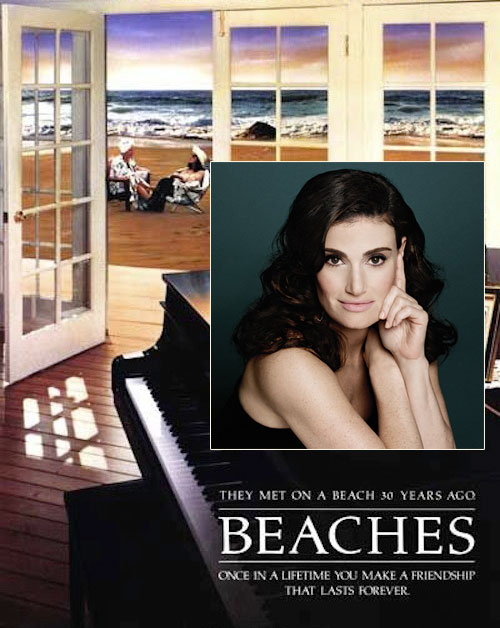 Idina Menzel fans will be thrilled to hear the news that the Tony Award winner is set to star in a 2017 remake of the Bette Midler classic film, Beaches.

Menzel will offer her take on the role of “CC” created by Midler back in 1988. The original film was directed by recently deceased Garry Marshall, and costarred Barbara Hershey.

The role includes singing iconic pop anthems (something Menzel does quite well) “Wind Beneath My Wings” and “The Glory of Love.” Menzel will also record additional songs for the TV movie.

Beaches follows the serendipitous meeting of two youngsters, CC and Hillary, on the Venice Boardwalk, who, though worlds apart in lifestyle, embark on unexpected and lifelong friendship. Menzel’s CC is an aspiring singer trying to make it in Los Angeles until she is discovered by a director who gives CC her first big shot. Hillary, played by Barbara Hershey in the original and yet to be cast in the remake, is the daughter of a prominent civil rights lawyer who struggles to find her own destiny. Their friendship—even with its ups and downs—sustains them for decades.

The movie was a box office success, grossing $57 million domestically, with “Wing Beneath My Wings” winning Record and Song of the Year Grammy Awards (and becoming a pop culture anthem.)

Here’s a clip from the film: