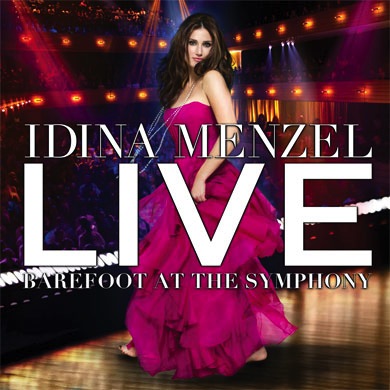 In the new Idina Menzel Live: Barefoot at the Symphony — filmed at Toronto’s historic Royal Conservatory of Music and airing on PBS Saturday, followed by an album, DVD, and digital download available Tuesday — Idina reaches back into the amazing musical repertoire that she’s spent over 20 years putting together.

The Advocate: Idina Menzel Live: Barefoot at the Symphony features lots of songs that fans would expect you to perform as well as some surprises. How did you choose the material?

Idina Menzel: The idea of having this magnificent, thrilling orchestra behind you is incredible, and yet it can be daunting, so I wanted music that would live and breathe but also strike a balance and maintain an intimacy. It’s an eclectic mix. There’s a lot of theatricality, but then there are moments when I talk to the audience and get personal, so it sort of came from that. I knew I wanted to share certain aspects of my life, so I figured out which songs would chronicle that.

For your signature songs, is it important to rework them?
Yes, but I have to be careful. A song like “Defying Gravity,” which I’ve sung so many times, in the past I’ve tried to mess with it too much. This time around, with the orchestra behind me, I decided to just sing it. My goal was to evoke that amazing moment in the show [Wicked], so I went back in that respect and really didn’t shy away from the drama and the theatricality of that moment.

Speaking of “Defying Gravity,” why do you think so many people respond to that song?
At some point in our lives, I think all of us feel that we’re weird or different. I know I can be very self-conscious about who I am and how I’m perceived. And it’s at that moment in the show that [Elphaba] decides, “I’m going to do this differently now. I’m gonna stop caring about what people think and just embrace who I am. Fuck what anybody else thinks.” She’s our hero because she stands up and does it. There’s also the other aspect that as a woman, it’s sometimes hard to be really fierce and strong. You want to be kick-ass, and yet as women we’re sometimes afraid we’ll be perceived as a bitch. The song is that character’s way of harnessing her incredible power and using it to change the world and influence people while not fearing her strength. I’m so thankful that I had that show because I could live in her world and be as powerful as I wanted.

Your song “Gorgeous” from your last pop record [I Stand] is a perfect anthem for marriage equality. Was that in your mind when you were writing it?
It totally was. It’s inspired by one of my best friends in the whole world, who moved to Rotterdam, Holland, to be with his boyfriend. It also fed into my own marriage — an interracial marriage — and the idea that it drives me up the wall when people don’t just mind their own business. We should be able to be who we are and live our lives — and the song was my response to feeling frustrated about that.

When did you first become aware of the battle for gay rights?
Probably when I was cast in Rent. By playing Maureen I was educating myself on …

What it was like to be a big, bad lesbian?
Yes! [Laughs] No, more about the experiences of the gay community. After seeing the show, young kids would write me letters saying they saw themselves in these characters and how grateful they were that we were celebrating them. This show gave many of them permission to be who they were. Wicked sort of carries on in that same tradition. It’s not necessarily about whether or not you’re gay, but it’s about finding who you are and celebrating that. So, while it wasn’t something I was necessarily planning on, I really took notice and understood that these people confiding in me was a gift, so I want to be as vocal as I can be for all of those who sat in the audience and made me feel so good.

Read more of the interview at The Advocate