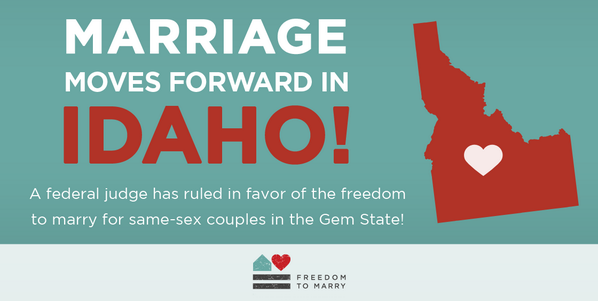 Freedom To Marry shares the news that today U.S. Magistrate Judge Candy Dale, a federal judge in Idaho, ruled in favor of the freedom to marry, striking down the state’s discriminatory constitutional amendment that bans same-sex couples from marriage.

The judge says Idaho’s marriage laws violate the couples’ rights under the Due Process and Equal Protection Clauses of the Fourteenth Amendment of the United States Constitution.

From the ruling:”Idaho’s marriage laws. relegate their gay families to a stigmatized, second-class status without sufficient reason.”

The judge stated that the order takes effect this Friday at 9am.

The decision was filed in Latta v. Otter, a federal case filed by the National Center for Lesbian Rights last fall that seeks the freedom to marry and respect for marriages legally performed in other states.

It comes just a few days after a May 5 hearing in the case, where Judge Dale heard arguments on the plaintiffs’ motion for summary judgment.