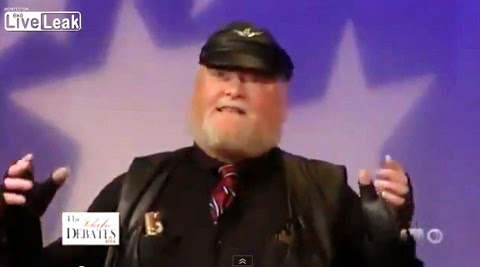 JoeMyGod points up this supercut of the recent GOP gubernatorial debate – and what a cast of characters!

The video is dominated by Harley Brown, the biker guy:

Idaho GOP gubernatorial candidate Harley Brown is running as the “candid candidate,” and he rode the candidness to the end of the line during a debate Wednesday evening, calling political correctness “bondage,” and defending his right to impugn everyone from Jews to blacks to “these bondage types” on his campaign website. It all started when a moderator asked Harley about the “Harleyisms” posted on his website. Samples: “A while back I visited Israel and discovered the REAL reason Jewish men get circumcised – Because Jewish women won’t touch anything that is not at least 20% off.” “Riding a Jap bike is like f_cking a faggot. I guess it feels OK until somebody sees you doing it.”