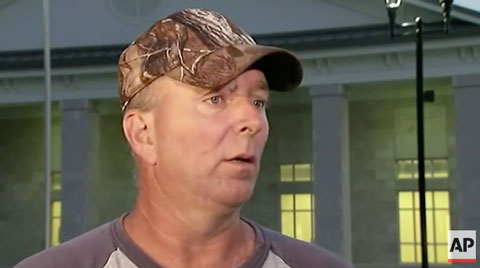 Standing in front of the Rowan County Court House, the husband of rogue County Clerk Kim Davis defended his wife, who had spent her first night in jail for refusing to follow the law and issue marriage licenses to same-sex couples.

Bunning offered to release Davis if she promised not to interfere with her employees issuing licenses, but she refused.

Holding a sign that says “Welcome to Sodom and Gomorrah,” Joe Davis said his wife would not resign from her position and would stay in jail for as long as it takes. “She’s not going to bow out,” said Davis.