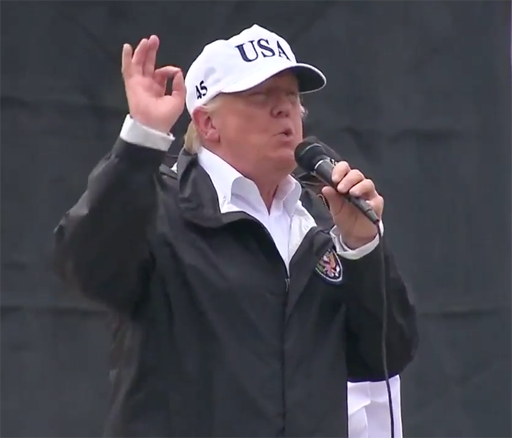 Humility, humility, where for art thou, humility?

Visting parts of Texas affected by Hurricane Harvey, Donald Trump was in classic form noting the size of his crowd gathered to see him.

“What a crowd, what a turnout,” Trump said to a crowd of several hundred people surrounding a fire station, according to a White House pool report.

The president reportedly spoke from a ladder between two fire trucks.

“Thank you,” Trump said to cheers.

“We love you, you are special, we are here to take care of you,” Trump said. “It’s going well.”

Trump to hurricane victims in Corpus Christi, TX: “Thank you everybody. What a crowd, what a turnout.” (via Reuters) pic.twitter.com/kVe3f8NmTL

What a contrast. This is Obama after Sandy.
This is Trump after Harvey “rally”: “What a crowd, what a turnout” pic.twitter.com/W7BE42Cgl5

Honestly, what is wrong with him? This is not a thing a normal human being says. https://t.co/qDhTla2IcH