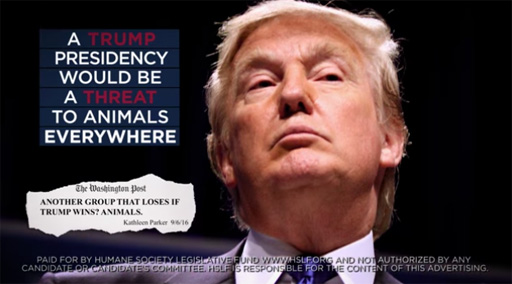 The Humane Society has endorsed Hillary Clinton for president, and in no uncertain terms denounced the idea of a Donald Trump presidency.

In our view, Trump represents the greatest threat ever to federal policy-making and implementation of animal protection laws, and we are taking the unusual step of wading actively into a presidential campaign. HSLF has members who are Democrats, Republicans, and Independents, and supports lawmakers and candidates from all over the political spectrum. We evaluate candidates based on a single, non-partisan criterion—their support for animal protection—and do not default to one party or the other.

When you consider the potential for advancing animal welfare reforms at the federal level, or rolling back the recent gains and rulemaking actions, there could not be a greater contrast among the White House hopefuls. One ticket has a clear, compelling record of support for animal protection, while the other has assembled a team of advisors and financial supporters tied in with trophy hunting, puppy mills, factory farming, horse slaughter, and other abusive industries.

The names that Trump’s campaign has floated for engagement on Interior and Agriculture department issues are a “who’s who” of zealous anti-animal welfare activists. Troublingly, Donald Jr. has even been floated as a possible Interior Secretary. Both sons at the very least would be Trump’s top advisors and strategists on trophy hunting issues.

The risk of having a globe-trotting trophy hunter at or near the helm at Interior, or having the ear of the President, should be a terrifying prospect for any animal advocate.