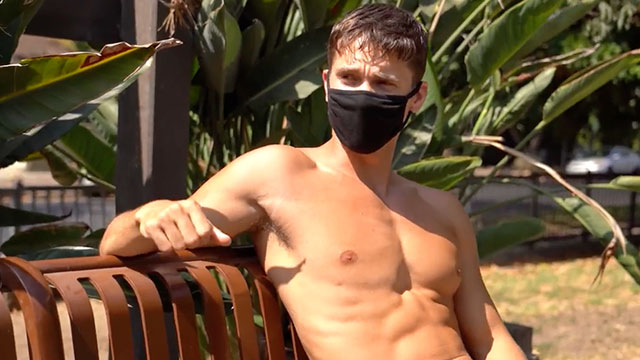 Living in the current COVID-19 world, funnyman Michael Henry has been working on a solution to his one big issue with wearing face masks: how to flirt.

And the answer is? Becoming a ‘winker.’

“I’m a big smiler, and guys can’t see how sweet and sensual I am with these masks on – look,” says Henry as be breaks into a dead corpse state.

Yeah, that isn’t going to get it done.

The problem for Henry is he “gives off a lot of social cues ‘orally.'” Read that however you like…

Andrew’s not convinced, though, in part because he thinks winking is “creepy.”

Andrew: “I feel like when guys wink at me it just means they want to f$%k me.”

Henry: “Yeah, that too. I want guys to know I’m DTF…but also coy and confident.”

Andrew still isn’t convinced but it turns out he has his own issue the approach: he’s wink-challenged.

But that’s alright because Andrew has figured out his own way to break the ice and let guys know he’s DTF that usually works.

Hit the play button to see Andrew’s solution (which also tends to bring out the Gay Bottom Mafia).

By the way, this post is actually a twofer because – in case you noticed – the hottie Andrew is totally InstaHunk worthy, so head over to his Instagram account where 337K people check in on the good doctor and self-described ‘wizard.’

Posing with a sword around plants without pants is actually my dream life.

Practicing lightening magic in the closet? There’s gotta be a gay pun there. Idk ⚡️

This trip to the Giant Forest has been shocking!