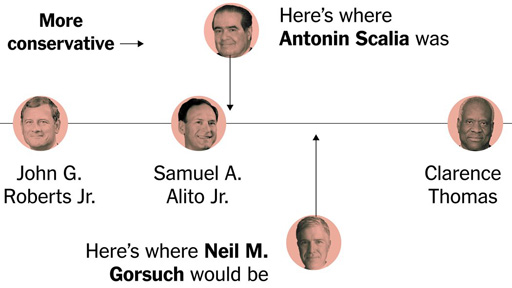 The New York Times explains who and what kind of judge President Trump’s nominee to replace Antonin Scalia on the U.S. Supreme Court, 49-year-old Neil Gorsuch, would be.

Who is Judge Gorsuch? He has deep ties to Washington, where his mother was a high-level official in the Reagan administration. After attending Columbia and Harvard Law School, he served as a clerk for Justice Anthony M. Kennedy. Later, Judge Gorsuch worked in private practice and in the Justice Department.

What is his judicial philosophy? Judge Gorsuch is an originalist, meaning he tries to interpret the Constitution consistently with the understanding of those who drafted it, our writer explains.

While he has not written extensively on several issues of importance to many conservatives, including gun control and gay rights, Judge Gorsuch has taken strong stands in favor of religious freedom, earning him admiration from the right.

He would be expected to vote to limit gay rights, uphold restrictions on abortion and overturn affirmative action programs.