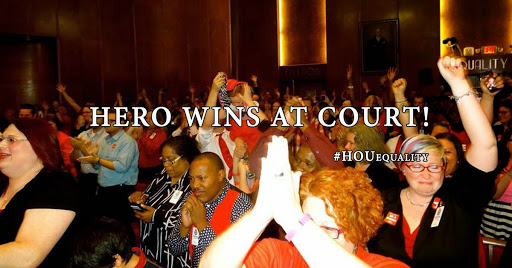 Anti-gay foes hated that. They began a drive to put the ordinance to a vote hoping to repeal the protections. They needed 17,269 signatures, or 10 percent of the ballots cast in the last mayoral election.

After turning in what seemed to be more than enough signatures, it turns out the opponents were 585 signatures short.

After separate rulings from both a jury and state District Judge Robert Schaffer, attorneys for both sides entered dueling counts of the valid signatures, adding and subtracting voters as Schaffer responded to motions. By early this week, the counts were closer together than ever before, fewer than 1,000 signatures apart.

Ultimately, Schaffer on Friday ruled the final count of valid signatures was 16,684, leaving opponents short of the threshold required in the city charter of 17,269 signatures, or 10 percent of the ballots cast in the last mayoral election.

“The jury’s verdict and the judge’s ruling are a powerful smack-down against the forces of discrimination and intolerance,” said Geoffrey Harrison, lead attorney for the city, in a statement. “And maybe, just maybe, they’ll reconsider their misguided ways.”

Opponents, largely conservative activists and pastors whose objections center on the protections the law extends to gay and transgender residents, are expected to appeal the ruling.