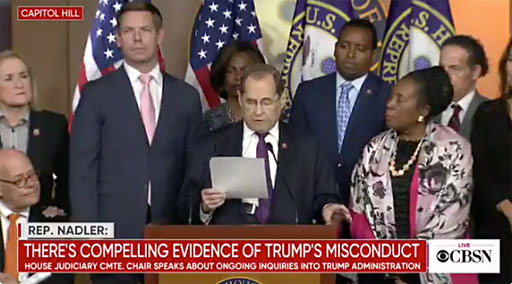 “It is clear that any other citizen of this country who behaved as the president has, would have been charged with multiple crimes,” said Nadler in his announcement. “No one can be above the law, not even President Trump.”

“Because Department of Justice policies will not allow prosecution of a sitting president, the United States House of Representatives is the only institution of the federal government that can now hold President Trump accountable for these actions.”

“To do so, the House must have access to all the relevant facts and consider whether to exercise all its full Article I powers, including a constitutional power of the utmost gravity — recommendation of articles of impeachment.”

“No one can be above the law, not even President Trump,” Rep. Nadler says https://t.co/V0V8wxkZX6 pic.twitter.com/9WoCe0CRq8

Nadler explains they’ve been trying to work with DOJ, but that it’s been fruitless. Still, they’ll be able to show they’ve tried to work with DOJ and it hasn’t met their needs. pic.twitter.com/1MFyyFBR9e