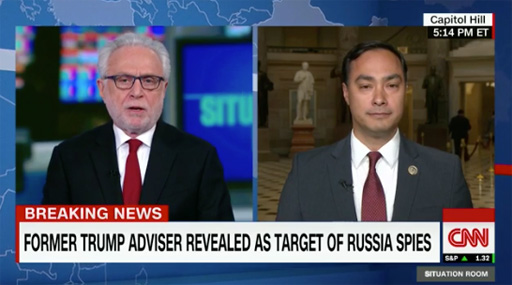 In an interview with CNN’s Wolf Blitzer this afternoon, House Intelligence Committee member Rep. Joaquin Castro (D-TX) said, with no pause, that based on the evidence he has seen some Donald Trump associates will go to prison over their ties to Russia.

BLITZER: You want to elaborate on that give us more? Because that is obviously a very intriguing statement.

CASTRO: I wish I could, but I can’t at this time.

BLITZER: You’re confident that some Trump associates will end up in jail.

CASTRO: If I were betting, yes.

BLITZER: Including some working in the new administration or people who worked or advised the president during the campaign or maybe during the transition?

CASTRO: As you can imagine, Wolf, I will have to comment on that later. But my impression is that people will probably be charged and probably go to jail.

WOW. Rep. Joaquin Castro on Russia investigation: “I wouldn’t be surprised … that some people end up in jail” https://t.co/g6KvvWvuR8