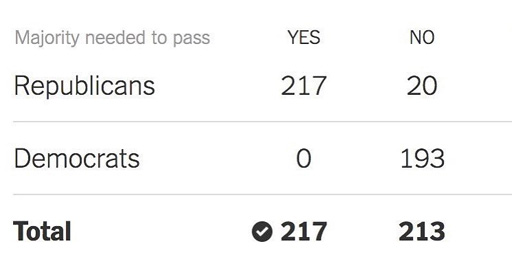 Barely squeaking over the 216 threshold, House Republicans were finally able to pass their “repeal and replace” legislation to end Obamacare by a vote of 217-213.

Much wrangling was done in the last few hours to get the final votes, but the legislation now moves to the Senate where substantial changes to the bill are expected.

Along the way, there was no CBO score nor were there any public hearings on the bill.

The new legislation allows individual states to opt out of protection for pre-existing conditions, although $8 billion is included in the bill to help pay for “high risk” pools to help those folks find coverage.

According to several media sources, Democrats could be heard singing on the House floor “Na Na Hey Hey Kiss Him Goodbye” to Republicans as the measure was passed. In recent polls, the new legislation has been found to be very unpopular.

Apparently, many Republican House members hadn’t read the bill as of this morning.

So there’s no final text of the bill.

And there’s no updated CBO score.

Cases upon cases of beer just rolled into the Capitol on a cart covered in a sheet. Spotted Bud Light peeking out from the sheet— Alexandra Jaffe (@ajjaffe) May 4, 2017

Trumpcare passed House, beer rolled in on carts for celebrating. This massive mistake is all on the @GOP.