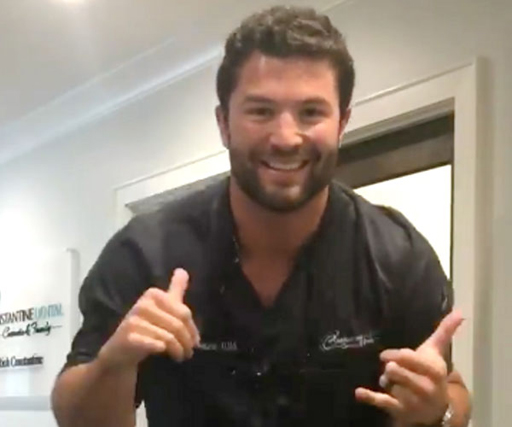 South Carolina dentist Dr. Rich Constantine has gone viral thanks to his “Shiggy” dance video to Drake’s “In My Feelings.”

Posted last Thursday on Facebook, the viral video of the sexy doc has racked up almost 50 million views in only three days and been shared almost 600,000 times.

The challenge began after Instagram comedian TheShiggyShow put together the dance steps and folks started posting videos doing the dance.

Speaking to Good Morning America today, Constantine shared his amazement at the widespread audience the video has gotten.

“It was surreal! I’ve never seen anything like that before. I’ve maybe gotten a couple thousand views before at best. That’s it. Never expected anything like this,” Constantine told GMA. “I thought a few people in Greenville, South Carolina, might see it, and a few of my friends and family members. But I had no idea that it would get legs like it did and take off.”

The comments on the viral video have been wild as well. One commenter wrote, “Annnnnnnd he has the smooth “dap” when he walks?!?!? Jesus be a moving van, take the wheel and drive FAST ’cause I’m headed to Greenville, SC!!”

The dentist’s staff had been urging the self-proclaimed Drake fan to take part in the dance challenge, but he was a bit too shy initially.

Constantine says he changed his mind in an effort to show his fun side.

Acknowledging visits to the dentist aren’t always something folks look forward to, Constantine shared, “We like to do fun things at the office to keep the atmosphere light and to make patients smile.”

Trust and believe, Dr. Constantine, you made us smile.