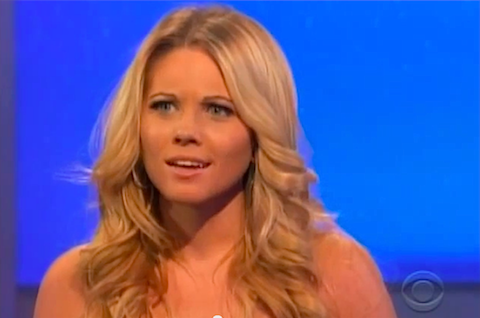 Last night’s episode of Big Brother saw 22-year-old Texas college student Aaryn Gries evicted from the house in a unanimous vote. Gries’s gameplay was overshadowed by the racist and homophobic comments she made earlier this season that were recorded on the show’s live feeds.

Gries initially attempted to sweep the issue under the rug by saying her comments were “taken completely out of context,” but host Julie Chen pulled no punches in grilling Gries during the exit interview:

CHEN: “We want to point out everyone in the house went in knowing that everything they say, everything they do gets broadcast live on the internet. So when you say the intention was not to hurt anyone, let me just read back some of the things you said. Referring to [African-American contestant] Candice, you said ‘Be careful what you say in the dark, you might not see the b*tch.’ Referring to [Asian-American contestant] Helen, you said ‘Shut up, go make some rice.’ Referring to [openly gay contestant] Andy, you said “No one is going to vote for whoever that queer puts up.” Can you see how those things could be interpreted as racist and as homophobic?”

GRIES: “I do, but I do not remember saying those things [audience laughs]. And those things were not meant to be serious and if I said those things I feel horrible for that and I regret that. I don’t even know what else to say about that…

It’s actually kind of fascinating to watch the clip below as Gries reacts to Chen’s questions.  Her breathing starts to get heavy as she hears her own words tossed back her way.  Her convenient amnesia is almost sad.

I grew up in Texas – I know this animal.  “If I said those thing…”  Wow.  IF. As though Julie Chen were making it up.

Towards the end of the interview, however, Gries seems to finally understand the gravity of her situation:

“I honestly feel horrible. I feel like, in Texas we say things that are, sometimes we joke and we don’t mean it and I really feel bad that this is how its being seen and how I’ve come across to people. I don’t want to seem like that person and I really do respect everyone in this game although we’ve had some hard times cause we’re all fighting for our lives in the game.”

Because Gries is heading to the jury house portion of the game, she was not informed of her newly minted unemployment status as a result of the statements.