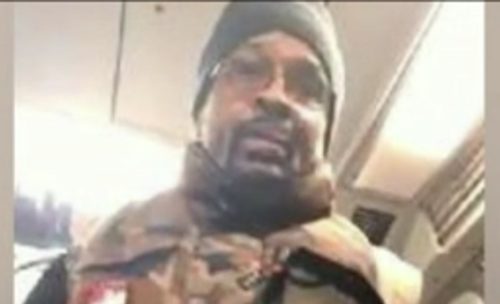 Earlier this week, I reported on the violent homophobic attack on a New York subway train that left a young woman with a fractured spine.

According to The New York Daily News, the alleged perpetrator has been apprehended and charged with aggravated harassment and assault as a hate crime.

Allah Allasheed, 54, faces up to 15 years in prison if convicted.

The assault occurred on November 20 aboard an E train in Queens.

The victim, a 20-year-old college student, tells the Daily News her friend “gave me a kiss on the cheek while she was making a Snapchat.”

That somehow triggered Allasheed, who flew into a rage, as he started screaming at the two young women.

“Don’t do that gay shit in front of me!,” he yelled as he threatened the victims. “Do that one more time and watch what happens!”

The two students say they stood up to put some distance between themselves and the man, and that’s when he jumped up and ran towards them.

“I knew he was going to hit me,” the victim told The Daily News. “He punched me in the back. I turned around and before I could even defend myself …. he threw me back. My head hit the pole and my back hit the ground.”

Allasheed apparently managed to escape when the train stopped at the next stop.

Hospitalized with a C7 vertebrae fracture near the base of her neck, the victim also suffered torn elbow ligaments trying to catch herself as she fell.

Treated at Elmhurst Hospital, she returned to school for end of semester exams. Nearly a month after the violent assault, she still wears a neck brace.

Allasheed was captured by the New York Police Department Hate Crime Task Force. According to reports, he confessed to the attack and the use of hate speech.

“I stood up and told her kiss her again you dyke and watch what happens,” he allegedly told authorities, according to the Daily News. “I pushed the girl, she turned around and then she fell.”

The victim told the Daily News she is, of course, relieved the assailant has been arrested and charged. She also doesn’t want the incident to change her.