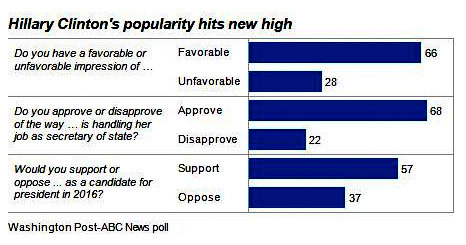 Top Democratic strategist James Carville has suggested that if Hillary decides to run, other top Dems may back off:

“We don’t need a primary. Let’s just go to post with this thing. We don’t want to fight with anybody over anything. The Republicans, they need a fight. Somebody’s got to beat somebody. We don’t want a primary. We like winning presidential elections. She’s popular. Let’s just go with it. I don’t know what she’s going to do, but I do know this: The Democrats want her to run. And I don’t just mean a lot of Democrats, I mean a whole lot of Democrats, like 90 percent across the country. We just don’t — we just want to win, we think she is the best person and shut it down. And that’s across the board.’