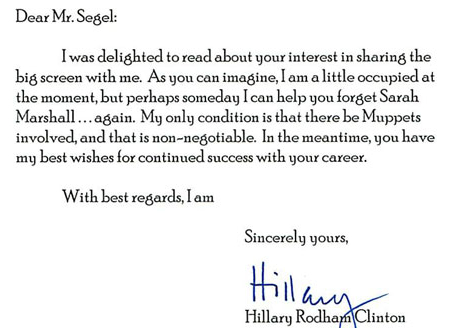 Hillary Clinton just gets funnier and cooler by the day.

Jason Segal recently explained
that when reporters ask who the mysterious mother is on “How I Met Your
Mother,” he tells them it’s Clinton.

Last month, he also told Us Weekly
that he thinks she “would be good at comedy” and joked that he’d like
to work with her on the (fictional) film “Forgetting Sarah Marshall 2:
This Time It’s Personal.”

The secretary of state apparently heard of his requests and wrote Segel a letter.

Above is  the note that Hillary sent the “How I Met Your Mother” star last month.