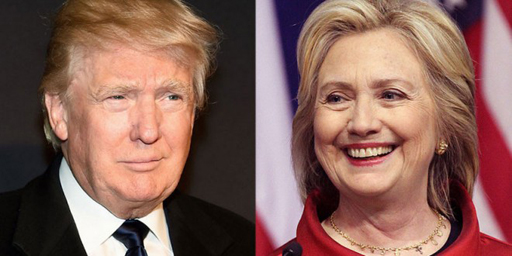 The Washington Post reports former Secretary of State Hillary Clinton says in an interview scheduled to air on CBS Sunday Morning this weekend that Donald Trump is an ‘illegitimate’ president who won’t be reelected in 2020.

Clinton was asked whether it angers her that none of the current Democratic candidates invoke her on the campaign trail while Trump’s rally crowds still break out into “lock her up” chants.

“No, it doesn’t kill me because he knows he’s an illegitimate president,” she said. “I believe he understands that the many varying tactics they used, from voter suppression and voter purging to hacking to the false stories — he knows that — there were just a bunch of different reasons why the election turned out like it did.”

She compared Trump’s latest effort to spread negative stories about Biden, who is leading in most polls to be the 2020 Democratic nominee, to what he did to her during their campaign.

Clinton also predicted Trump would lose in 2020 because “there were many funny things that happened in my election that will not happen again.”

Additionally, Clinton shares that she supports an impeachment inquiry as there are “a number of grounds” for it but says that Trump’s phone call with Ukrainian President Volodymyr Zelensky, when Trump asked Zelensky to investigate Biden’s son, is “incredibly troubling.”