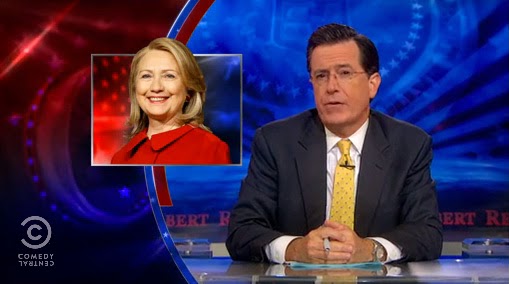 Hillary Clinton made a surprise appearance last night on The Colbert Report as Stephen Colbert offered his doubts that Clinton had actually met all the people she mentions in her new book Hard Choices.

The segment became a “battle of the dropped names” as Colbert and Clinton countered each other with the famous folk they knew.

“First, I’d try to find common ground between ducks and horses – for instance, they both grew up on Old MacDonald’s Farm. Then, I’d establish a timetable to achieve meaningful horse-duck dialogue. Stephen, I’m convinced that with patience and a strong commitment from our allies, the pigs and the geese, we’d have peace, peace here, peace there, here a peace there a peace everywhere a peace, peace,” Hillary says, giving her best diplomatic version of “Old MacDonald Had A Farm.”