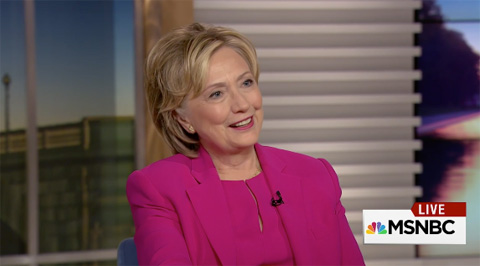 Former Secretary of State Hillary Clinton does a deep dive into foreign policy with Chuck Todd on the inaugural episode of MTP Daily.

Note the calm grasp of very complex issues here. This is someone who knows what she’s talking about.

In an interview on MSNBC’s MTP Daily, Clinton said fighting ISIS would be “very difficult” with Assad still in place and she would “prioritize both” because “you can’t really do one without the other.” She added that “ousting Assad has to be a political process.”

“I think that we’re going to have to, as they say, walk and chew gum at the same time. And that will be to, you know, do the best we can with our friends in the region to go after ISIS and try to, you know, push them out of Iraq and then try to, you know, deal with them and the territory they control in Syria,” Clinton said.

Clinton has advocated for more American involvement in arming the moderate Syrian rebels to fight both Assad and ISIS–in contrast with the Obama administration. Asked if reports that only a handful of rebels trained by the U.S. remain engaged in the fight represents a “failure in policy,” Clinton replied, “well, it is.”

“I can’t sit here and tell you that if we had done what I and General Petraeus and Secretary Panetta and others had recommended, we would have made more progress on the ground. I obviously thought so at the time,” Clinton added.

“If we had been able to move in, to help organize and support those people on the ground, maybe we could’ve made a difference. Well, we’ve got to deal with where we are right now. It’s obviously now a different set of circumstances. And what the Pentagon has been doing hasn’t worked.”

On the fight against ISIS, Clinton said, “I think part of the challenge that President Obama’s been facing is to build up the Iraqi forces again after Maliki decimated them. And to get them in a fighting position and to get the Kurds, particularly the Peshmerga able to be fully equipped then to try to go after ISIS in Iraq and Ramadi and Mosul, pushing them out if possible.”

Can you even imagine Donald Trump having this level of discussion about foreign affairs?

“Chuck, we’d be yuuuuuuuge in the middle East. Yuuuuuuge. They’re a bunch of losers.”