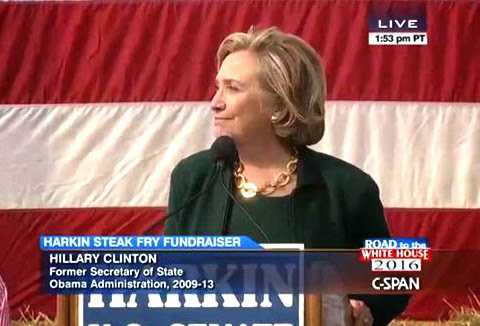 With her husband Bill Clinton at her side, Hillary Clinton greeted Iowa with a warm and full-throated “I’m back” at the 37th (and final) Harkin Steak Fry hosted by retiring Sen. Tom Harkin.

“When Tom Harkin called and asked me to come, I have to admit, I wasn’t sure what to say. I’ve got a few things on my mind these days,” Hillary said, then acknowledging her quickly approaching status as grandmother.

Then, she alluded to the obvious:

“Then of course there’s that other thing,” she said. “It is true, I am thinking about it. But for today, that is not why I’m here. I’m here for the steak.”

In a nod to her former boss, Hillary said, ” It does really feel just like yesterday when I was last here at the Harkin Steak Fry. As I recall, there was a young Senator from Illinois there at the same time. And I wonder whatever happened to him?”

Hillary recently indicated that she is, indeed, considering another run, but won’t announce until January 2015.