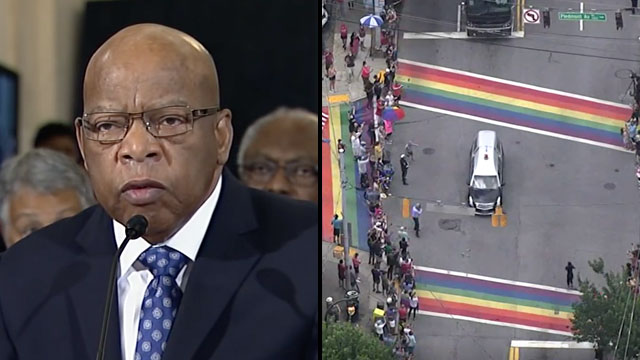 As the motorcade for the late civil rights icon Rep. John Lewis (D-GA) made its way through the streets of Atlanta on Wednesday heading to the Georgia State Capitol, the hearse carrying his body paused in tribute to his support for the LGBTQ community at an intersection marked by rainbow-painted crosswalks.

Supporters were already waiting at Piedmont and 10th Street where the scheduled stop had been previously announced.

When the hearse paused in the intersection, supporters clapped and cheered the memory of the civil rights legend. And as the motorcade resumed its journey, Terrence James, a downtown Atlanta resident, began singing “We Shall Overcome.”

Terrence James, who lives downtown, began singing “We Shall Overcome” as Lewis’ hearse paused at the rainbow intersection pic.twitter.com/SBHCvlyRs9

In addition to his lifelong commitment to equal rights for Black Americans, Lewis was an early ally to the LGBTQ community

In 1996, long before gay rights were widely embraced by mainstream America, Lewis took to the floor of the House of Representatives to denounce the heinous anti-gay Defense of Marriage Act (DOMA) as a “mean” and “cruel” bill.

“This bill seeks to divide our nation, turn Americans against Americans, to seed fear, hatred, and intolerance,” declared Lewis. “Marriage is a basic human right. You cannot tell people they cannot fall in love.”

A few years later, he penned an op-ed for the Boston Globe urging equal rights for LGBTQ Americans.

“I’ve heard the reasons for opposing civil marriage for same-sex couples. Cut through the distractions, and they stink of the same fear, hatred, and intolerance I have known in racism and in bigotry.”

And in 2017, he compared the struggles by the LGBTQ community to those of other marginalized Americans.

“It doesn’t matter whether they are black or white, Latino, Asian American or Native American, whether they are straight or gay, Muslim, Christian or Jews,” Lewis said during a Congressional hearing. “We all live in the same house. The American house.”